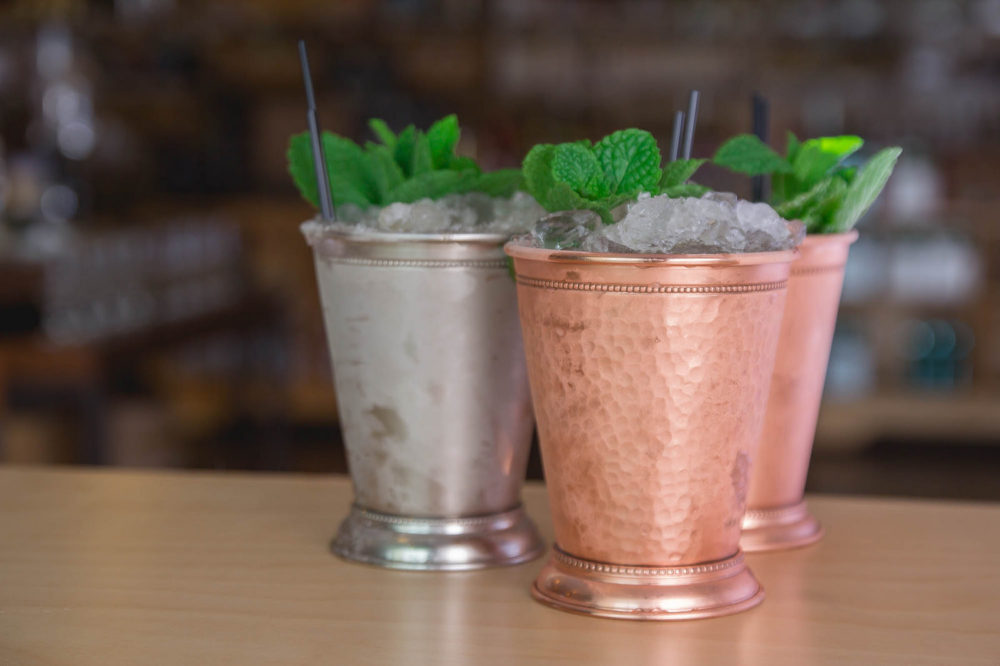 A cursory Google search proves that making a “classic” or “perfect” mint julep is a topic of concern to the modern cocktail enthusiast. And wading through the results, you’ll find that the answer is simple and practically unwavering: fresh mint, bourbon, granulated sugar or simple syrup, and crushed ice.  Sure, there are minor difference in details like the treatment of the mint. But in general, the recipe is sacrosanct.

The rules for mint juleps weren’t always so rigid, however. At the height of their popularity in the nineteenth and early twentieth centuries, when the pleasures of the cooling elixir were regularly and vehemently extolled in elegant prose, there was considerable variance in their construction. Everything from the liquor to the propriety of using a drinking straw was up for energetic debate. 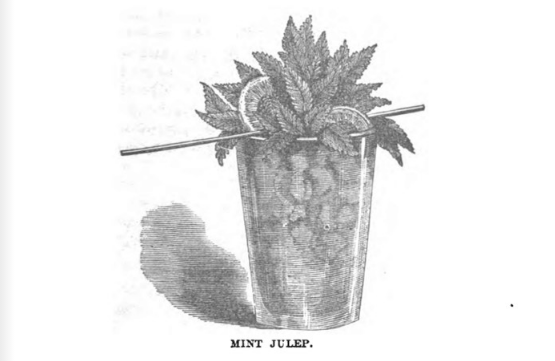 A proper mint julep, according to Jerry Thomas's recipe in The Bar-Tenders’ Guide: A Complete Cyclopaedia of Plain and Fancy Drinks, 1862.

For starters, bourbon--now a mint julep requisite--was far from standard. In “Bab Sojourns in Narragansett,” a 1898 short story targeting women readers, a female character defiantly declares of mint juleps “Nothing will convince me that rye whiskey isn’t the proper to thing to use!” Rewind to 1869’s Cooling Cups and Dainty Drinks by William Terrington, and you’ll find that equal parts common and peach brandy were required of “a real mint julep.” Claret and Madeira listed as common variations.

Take three or four sprigs of fresh mint, and press them well in the sugar and water, until the taste of mint is extracted; add one and half wine glass of Cognac brandy, and fill the glass fine shaved ice, then draw out the sprigs of mint and insert them in the ice with the stems downward, so that the leaves will be above, in the shape of a bouquet; arrange berries, and small pieces of sliced orange on top in a tasty manner, dash with Jamaica rum, and sprinkle white sugar on top. Place a straw as represented in the cut, and you have a julep that is fit for an emperor.

Other nineteenth century recipes called for a dash of port or a mixture of whiskey and brandy. Bourbon was specified for the "Atlanta Ga, Mint Julep" in Joseph Haywood's 1898 handbook Mixology: The Art of Preparing All Kinds of Drinks, but his standard mint julep was cognac based. All told, the insistence on bourbon appears to be a twentieth century phenomenon.

People Have Strong Feelings About Water

Liquor aside, Thomas’s recipe also brings up the issue of water. It was not uncommon in mint julep’s heyday to dissolve the sugar in a few tablespoons of the stuff. Some even insisted that the drink is only properly made with seltzer. On the other end of the spectrum were those who considered any water, other than ice, a defiling addition. In 1911, the topic of water stirred the passions of a particularly ardent editorialist writing for the New York Times:

A controversy has arisen, this hot July, over the mint julep. Men of seeming intelligence have been discovered who declare it should contain a certain proportion of water. The subject, of course, is obnoxious, and its discussion, in weather so warm, and within the hearing of weak mortals who still cling to the delusion concerning “cooling drinks,” is deplorable. We are convinced that the less said on this matter the better. But no person of ripe intelligence and sound taste could possibly hold that a mint julep should contain water.

The writer goes on to describe a perfect mint julep as one prepared with well-packed, freshly cracked ice “of polar temperature” in a heavily frosted tumbler ("not a Tom Collins glass, mind you, but a tumbler") with fresh mint unmolested by crushing or bruising. He ends his diatribe by reiterating that “whoever said that a mint julep should contain water is fit only for chocolate sundaes and such things.” Burn. 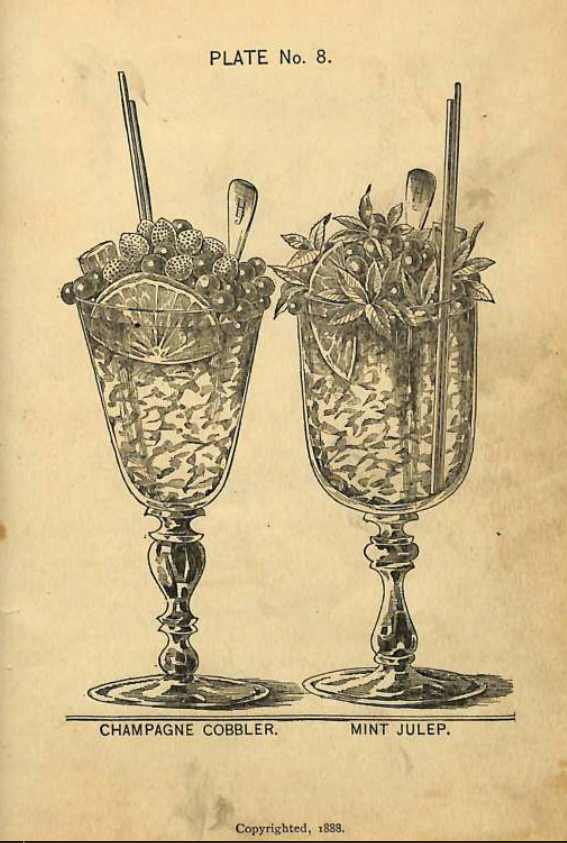 In his 1888 bartending guide "How to Mix Drinks of the Present Style," Harry Johnson advises that all cocktails garnished with fruit, like the mint julep, be served with a bar spoon. He made his mint juleps with a mix of brandy and rum.

No One Can Agree on Glassware

A mint julep’s serving vessel was yet another contentious matter. Some, like the aforementioned seething editorialist called for a tumbler. Others specified the need for a tall, thin Collins glass, pre-chilled to promote the accumulation of frost on the glass. Some earlier recipes and anecdotes favor intricate glass goblets. The decorative silver julep cups common today seem to have been a somewhat aristocratic or special occasion vessel. Families of the southern gentry passed them down through generations.

John C. Calhoun II (grandson of the vice president of the same name) carried his family’s silver julep cup when he traveled to be always mint julep ready. The pedigreed cup, it was said, had been given to his grandfather in 1836 and had been sipped from by the likes of American political figures Henry Clay and Daniel Webster. In any case, a metal julep cup is considered ideal because it frosts better than glass.

In some instances, the making of a “perfect” mint julep entailed the addition of citrus. Having visited the Petersburg, VA, estate of former Confederate General William Mahone sometime in the nineteenth century, a northern traveler claimed that Gen. Mahone’s body servant* was the only man “in all this broad country” who knew how to make a mint julep:

His juleps are works of art. Taking a long thin glass, he piles it up with layers of sliced lemon, alternated with finely crushed ice sprinkled with sugar, and then pours out just the right proportion of the finest old liquor upon it. But the julep is by no means finished. On the top long sprays of tender mint, carefully inserted in the crushed ice so that none of the stems or leaves is bruised, form a bouquet which is as large as a man’s fist. This, with two thin slices of cucumber, complete the work.

According to Mahone via the recollections of the northern traveler, a “true Southern mint julep...should consist of the flavor of the liquor, lemon, and sugar, cooled with ice, and the aroma but not the taste of the mint”--a far cry from our modern vision of julep “perfection”. He added further that Mahone was of the opinion that “the man who would bruise the mint in a julep would rob his own grandmother.” To that sentiment, at least, modern bartenders can surely relate.

In addition to lemons, fruits of various sorts made appearances in mint juleps throughout the nineteenth century. In Haney’s Steward and Barkeepers’ Manual, published in 1869, the purported method for constructing a proper mint julep was to shake your spirit with berries and orange segments. Pineapple spears were also commonly added right to the glass. And many nineteenth century cocktail recipe books called an artful arrangement of cherries, berries, and assorted other fruit the mint julep's appropriate garnish. 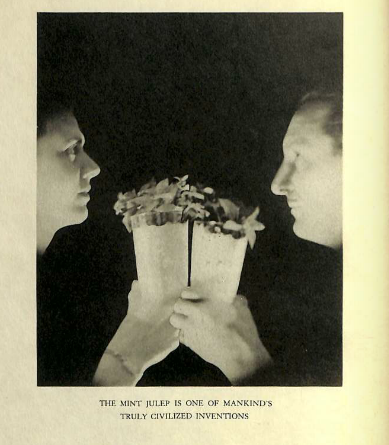 If this is what it looks like to enjoy a mint julep, count me out. Image from The Gentleman's Companion by Charles H. Barker, Jr.

To Straw Or Not to Straw?

And then there was the very contentious matter of drinking straws. Most vintage bartending book I’ve consulted insists on serving mint juleps with straws. Some even specified the precise method of presenting the straw with the drink. Thomas insisted that it be situated diagonally across the mouth of the mint julep glass. Others inserted it directly into the ice, and some called for multiple straws. At least one historical anecdote describes sipping a julep through a glass tube--a sort of fancy, reusable straw.

That said, a passionate cohort of lay julep consumers balked at the notion of using a straw of any kind:

A straw? Upon my word! Do you think you are at a soda fountain? What do you want with a straw when you can bury your nose in mint like that? Fragrance and flavor, that’s what. (“The Mint Julep of Old Virginia,” 1909)

It is difficult to feel any respect for a man who will drink a mint julep through a straw. Such a performance is positively uncivilized. (Birmingham Age-Herald, June 22, 1892)

Suffice it to say, no matter how you prefer your mint julep, someone out there, whether presently alive or extant only in the annals of history, thinks you are doing it very, very wrong.

* "Body servant" does not appear to be a euphemism for a slave in this context. It seems that Mahone (who was at one time a slave owner) moved to Petersburg sometime around 1880--after emancipation. Undoubtedly though, slaves were responsible for preparing a huge quantity of juleps consumed in American history. Unfortunately, their contributions to the evolution of the drink may be forever lost to history due to egregious silences in the archives. 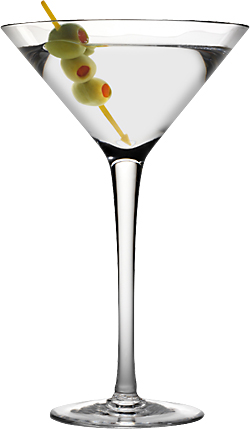 Cocktails and Martinis: Get in The Know