The legalization of marijuana continues to be a hot button issue throughout North America. It was made federally legal in Canada in October 2018. As of this writing, 10 US states and Washington, DC have legalized recreational marijuana in some form. Mexico is also working toward legalization.

Through the passing of the bipartisan Farm Bill in December 2018, hemp was made legal throughout the US. Currently, hemp beer is available for purchase in 49 of the 50 states (get it together, Kansas). This also may open up some avenues for nationwide CBD beer in the future. Meanwhile, alcoholic THC beer is not being sold anywhere in the US currently.

While it’s happening for the big names in the hemp beer market, leaders of the CBD industry continue to sell locally while also fighting legal battles to sell their product nationwide. The THC market is in the very beginning stages of its journey, with a long road ahead.

Let’s look at some differences, and still present legal hurdles, among the three. 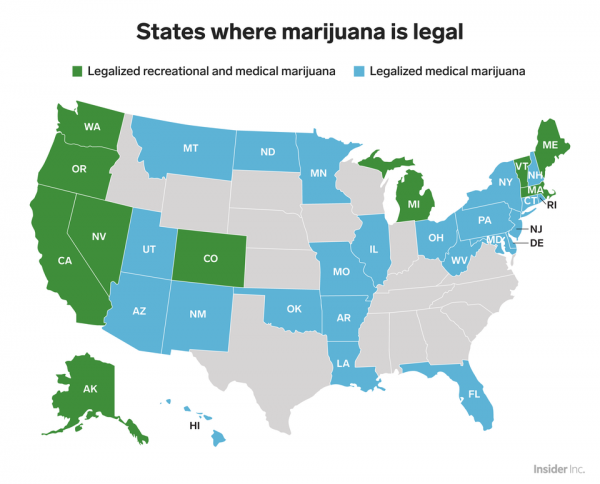 What is CBD Beer?

CBD infused beer is alcoholic beer brewed with CBD, or cannabidiol. This is the non-psychoactive component in marijuana, which means it produces a calming effect on the user, rather than the “high” produced by THC. CBD may give the user a bit of a body buzz, while not influencing their cognitive function.

With medical marijuana now legal in 33 of the states in the US, it’s clear that there’s a ton of positivity around the drug in the public and medical world. CBD oil is receiving a lot of support for its ability to assist patients in dealing with symptoms including:

There are many more medical benefits listed, but the big takeaway of these studies is that CBD assists in dealing with a variety of medical issues without producing a negative effect on one’s ability to think critically at a given time.

While generally considered to be less potentially harmful than THC, CBD also has some possible side effects, especially with overuse. They include:

As with the health benefits, there are other risks associated with CBD. This isn’t a medical website though, so if you want to see the full list, feel free to check it out or talk to a doctor.

The many CBD oil benefits are a big reason why this marijuana component has had a (relatively) easier path to legalization than THC, but it has still been a difficult one. 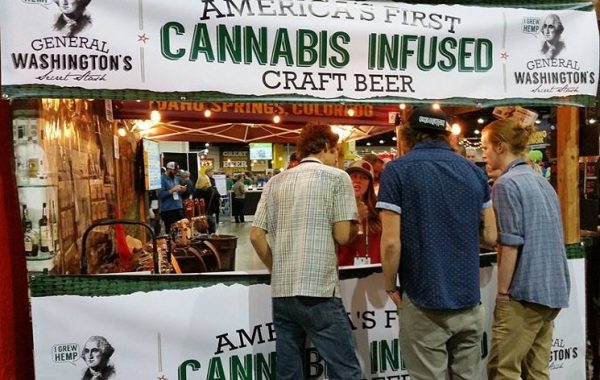 Dads and Dudes debuting the world's first CBD beer at the GABF in 2015 (Photo courtesy of westword.com)

That wasn’t the end of it though. They went back and forth with the Drug Enforcement Administration (DEA) up until the approval of the Farm Bill in December 2018. Until that point, both hemp and CBD were considered Schedule 1 drugs, right alongside LSD and heroin.

Now, the Dudes’ patent-pending CBD beer formula is under the scrutiny of the Food and Drug Administration (FDA) for getting interstate commerce approved. It is still illegal to transport any CBD food or drink products across state lines. So the Dudes currently sell their CBD beer at their pizzeria/brewery (breweria) in Colorado while sourcing all their ingredients and packaging in-state.

With the bill being passed and a federally-approved formula, there is growing hope and progress toward the ban on cross-country sales being overturned. Even then, there may be state level hoops to jump through before CBD sales are truly on. At that point, the biggest hurdle for the country-wide sale of CBD-infused beer would seem to be production. With a ton of consumer interest and willing investors, that hurdle should be cleared soon enough. 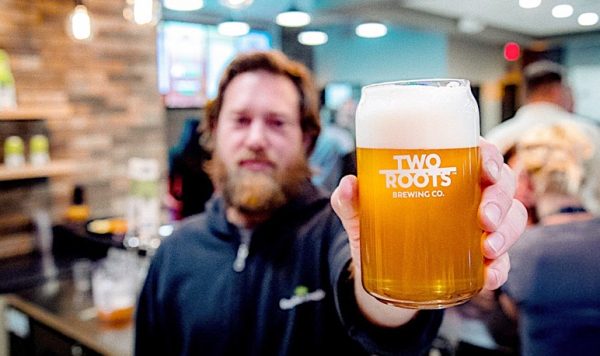 Some Other Big Names in the CBD Market

After Dads and Dudes reached an agreement with Cannabiniers, a San Diego cannabis company, widespread production may soon commence. Cannabiniers is in the process of acquiring a few other craft breweries, with the goal of 500,000 barrels of brewing capacity. That may not all be dedicated to CBD beer, however, as they are looking to brew traditional beer and non-alcoholic THC beverages as well.

Other breweries, such as Coalition Brewing in Oregon, and Great Dane Pub in Madison, Wisconsin, are on a similar business path as Dads and Dudes: Brewing and selling CBD beer in their state, striving for legal progress and consumer education, and not (yet) selling nationally.

What is Hemp Beer?

Hemp beer, such as the limited edition but now-discontinued SuperCritical from Lagunitas and The Hemperor HPA from New Belgium, use terpenes, which are aromatic compounds found in both cannabis and hops. Hemp beers add the flavors and aromas found in marijuana, but not the CBD or THC. 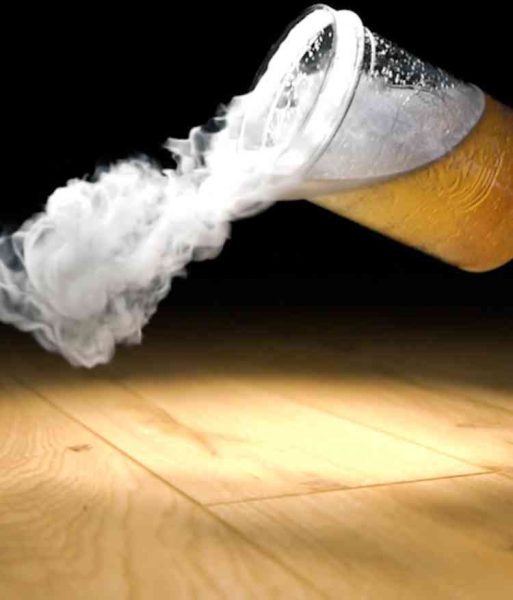 Legalities forced SuperCritical to be discontinued. Cool logo though. (Photo courtesy of Lagunitas)

Hemp and hops are pretty closely related, so they can be used similarly. However, the hemp may add the smells and flavors of a fresh bag of weed to your beer. So, if you’re someone who enjoys the smell of fresh marijuana, or the taste of the smoke, this “cannabeer” may be something you would enjoy.

Hemp beer has had a long legal battle of its own to fight, resulting in the hemp heart, also known as the hemp seed, being used in their formula instead of the whole hemp flower. Even though SuperCritical contained neither CBD or THC, the specific cannabis terpenes being used led to a forced halting of production by Lagunitas, with no plans to reintroduce it at this time.

Hemperor has been approved, however, and is likely available somewhere near you. But, if you’re expecting the “body buzz” produced by CBD beer, or the full on “high” produced by THC, you may be left feeling disappointed (and possibly drunk).

What is THC-infused Beer?

THC, or tetrahydrocannabinol, is the “psychoactive” component in marijuana, meaning it’s the active ingredient in marijuana that gives the user the feeling that they are “high”. Due to current federal law, no beer (or any drink) containing alcohol can also contain THC.

The medical benefits of THC are very similar to CBD, listed above. Most medicinal marijuana contains strands of both THC and CBD in them. THC is a more powerful component of the plant. It can produce a feeling of euphoria, and also block pain receptors, which allows it to assist in pain relief.

Someone who is taking medical marijuana every day before work might lean toward a CBD-heavy or CBD-only dose, though.

Side Effects of THC

In addition to being generally considered as more addictive than CBD, THC can have some of the following effects on the user:

These side effects are very similar to CBD, and a few sound similar to someone who’s had a few too many beers. The difference in the prevalence (and sometimes intensity) of these effects can be much greater for THC than CBD, however.

That is a large reason why CBD is gaining a lot more traction as a legal substance, while THC still faces an uphill battle legally in many states, especially as a component in alcoholic drinks.

Some Big Names in the THC Market

Late in 2018, the creator of Blue Moon, Keith Villa, started a new company called CERIA Beverages that brews non-alcoholic, THC infused beer. CERIA is brewed just like any other craft beer, but then the alcohol is taken out and replaced by cannabis. Unfortunately, if you want any, you’d have to go to a dispensary in Colorado. 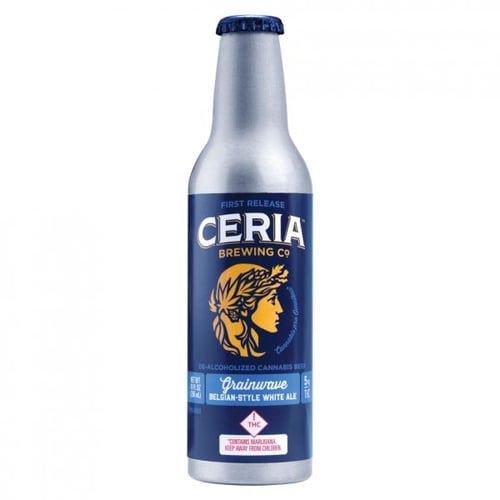 Lagunitas has introduced their own version of THC beer with Hi-Fi Hops. Also non-alcoholic, and also one where purchasability is limited (currently only available in California). Molson Canada is working with Hydropothecary, or HEXO, to develop their own option, but even in Canada, there are a ton of legal hoops to jump through before it is widely available. No beer with THC is currently available at all on their site. 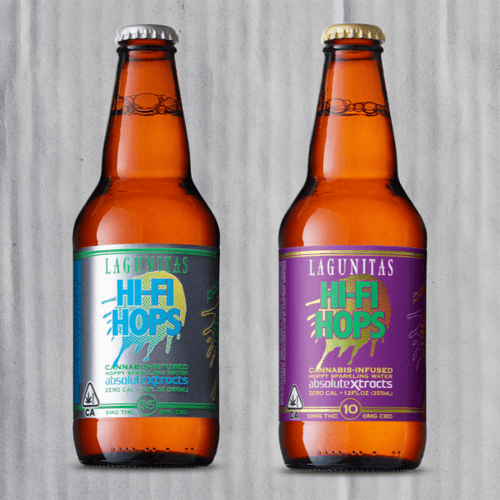 There still seems to be a lot of work ahead before these weed beers gain mainstream legalization, availability, and popularity. For now, you can likely find a hemp beer at a local store. For CBD beer, you’re probably going to have to travel to a place that brews it, as transporting it out of state may be a complicated issue for a while. And THC beer, it’ll be non-alcoholic and offer extremely limited availability (likely limited to dispensaries), barring some massive changes.

West Coasters are likely to enjoy the fruits of these brewer’s labor earlier than the rest of us, but this seems like a market primed to explode in the future. That is, if lawmakers will allow it.

Looking for reasons for optimism? Two Roots Brewing, also owned by Cannabiniers, has set the goal of having THC-infused beverages available in most legal markets by mid-2019, and CBD beer nationwide by the end of 2019. It may be a lot closer than you think. 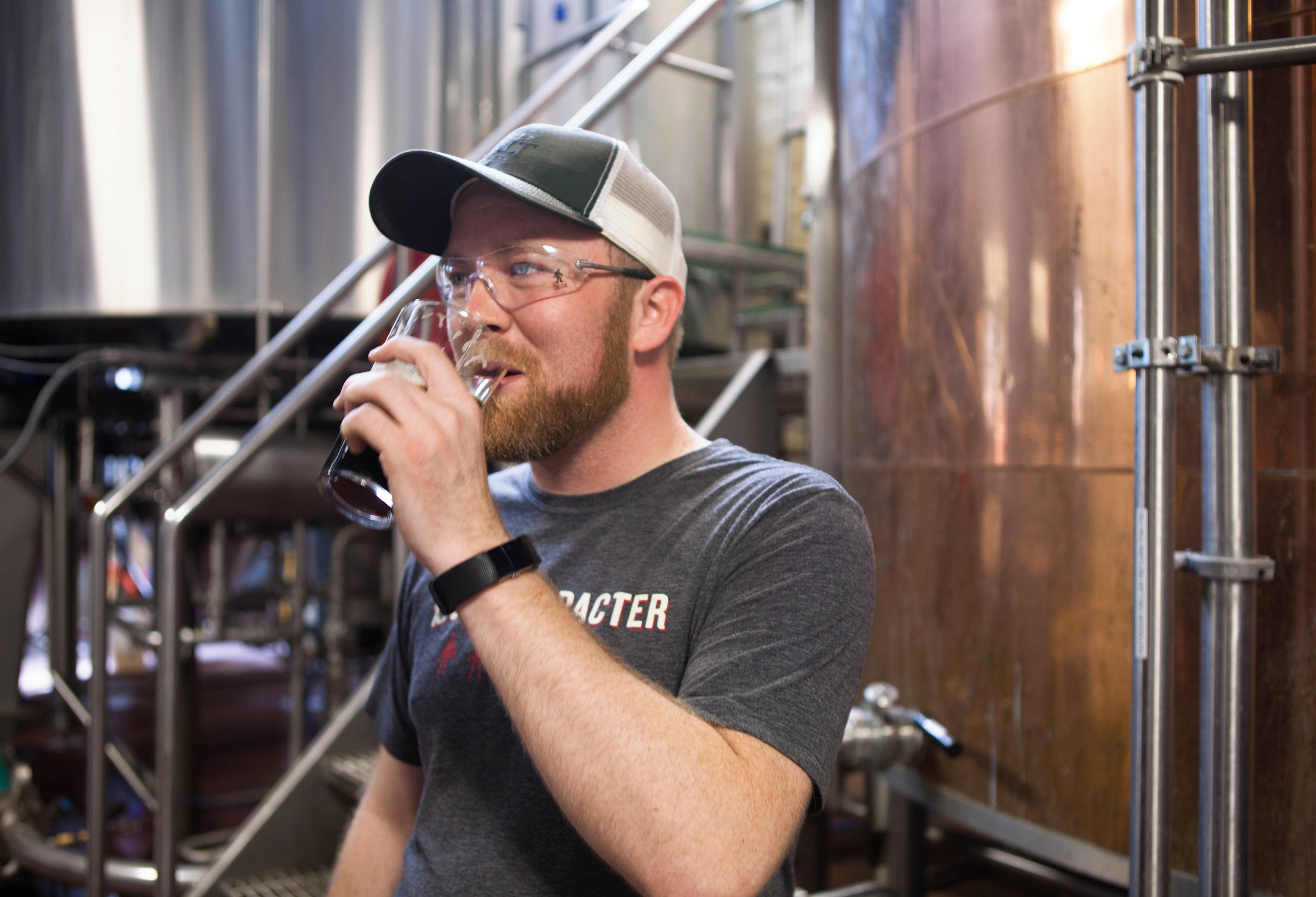 Which Beer Trends Will Take Over 2018? Some of Our Influencers’ Responses Had Us Like Whoa 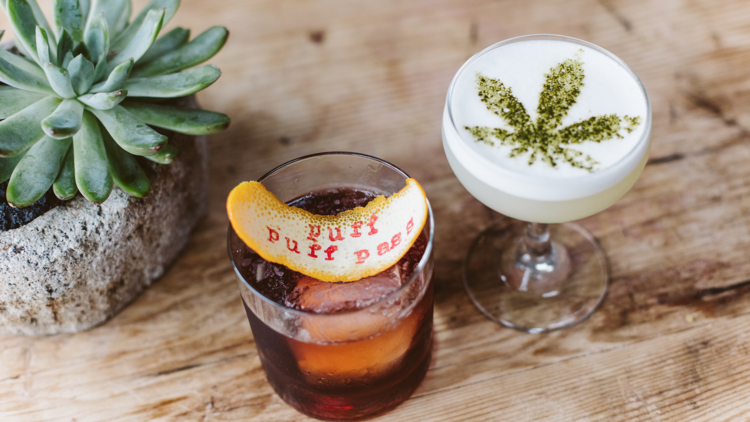 Cannabis Drinks: Coming to a Menu Near You?