Bar foot rail has been an institution in American drinking establishments for over 200 years. 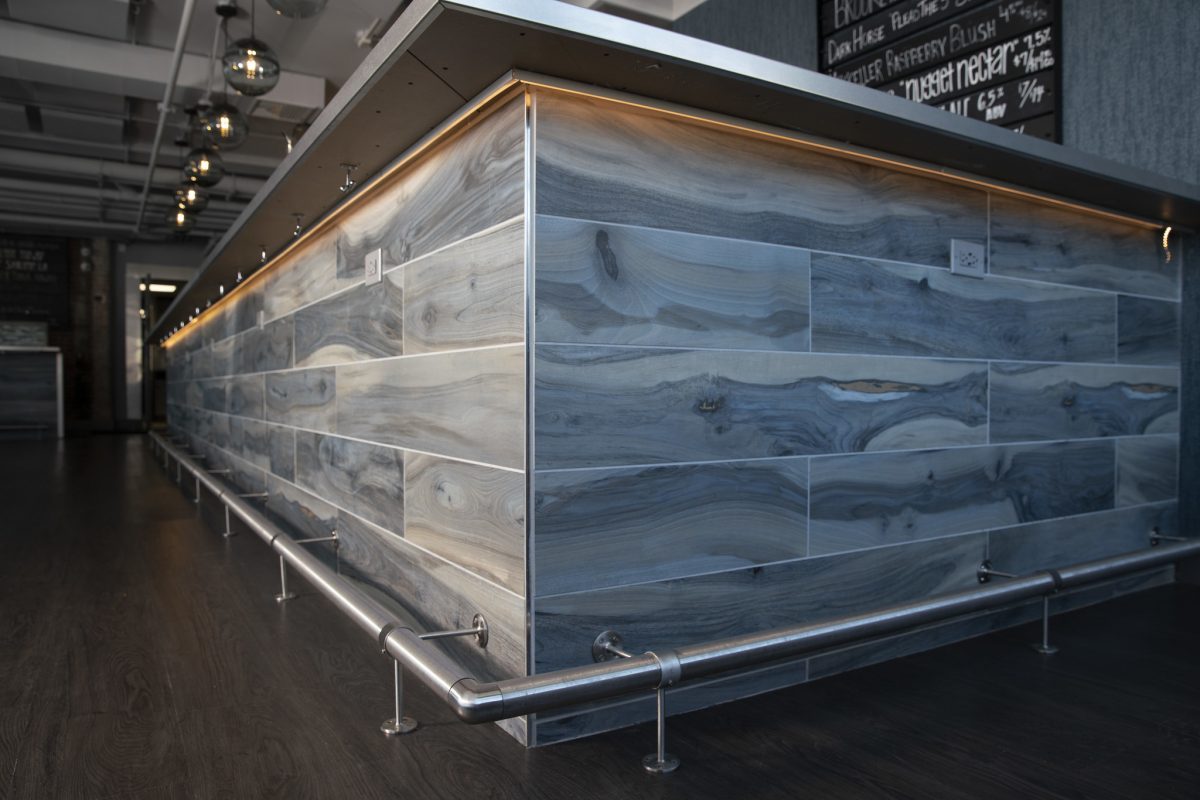 When you walk up to the bar and place your drink order, what do you do while you wait for the bartender to make your drink? (I mean besides look at your cell phone...) If you’re like us then you, more than likely unwittingly, take advantage of the bar foot rail that has been conveniently installed just a few inches from the floor in order to cozy up to the bar.

The exact history of bar foot rail is not clearly known. We don’t know who the genius was that first thought about giving someone standing at a bar a place to rest their foot. They should have got a medal or something.

It certainly had a foothold (no pun intended) in bars in America by the late 18th century. Food writer and historian Andrew F. Smith states in his book Food and Drink in American History, “bars were a feature of luxury hotels, which began to be built in American cities in the 1790s. Bars, especially those in urban areas, were upgraded into much larger rooms with long hardwood (mahogany or oak) counters that were sometimes ornately carved. Counters sported brass foot rails and sometimes handrails, designed to accommodate standup drinking.”

During the late 1800s, Brunswick, then known as the Brunswick-Balke-Collender Co., was the leading manufacturer of wooden bars and back bars (some are still in use today) in addition to making billiard tables. One of the many accessories you could purchase for your bar were foot rails made from either brass or galvanized iron. 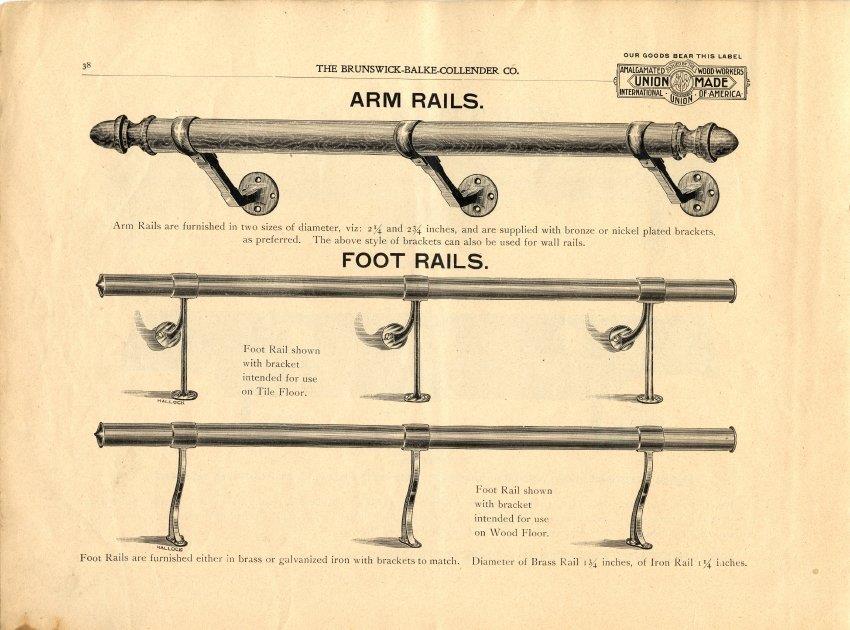 A Brunswick-Balke-Collender Company catalog from the late 1800s showing foot rails you could purchase with your bar.

Brunswick’s catalogs from this time show that their foot rail could be installed with one of four styles of brackets depending on the material of the bar’s floor. One of the brackets featured a hinged floor post that could be raised to make it easier to clean the floor in front of the bar.

This was an era before bars had chairs or stools lined up in front of the counter. Back then your neighborhood bar or tavern was a place where only men would congregate after a hard day of work or on their lunch break. You would come in, “belly up to the bar”, and enjoy a drink or two before going home or back to work.

In addition to giving support to bar patrons, another possible purpose of bar foot rail during these pre-Prohibition times was to keep a patron’s feet out of the trough that ran below the bar. And what was in the trough you ask? Well, it was likely a mix of tobacco spit, manure and, possibly, urine.

These trough spittoons were made from sheet metal, tile or marble, and were designed to replace the traditional spittoons you’ve seen in Old West movies. A constant supply of flowing water would rinse the trough’s contents down a nearby drain.

Spitting chewing tobacco on the floor/ground was an accepted practice during this era, and the trough served as a place for gentlemen to direct their expectorations. The trough was also a place someone could wash the manure off of their boots that they tracked in from the street outside. If the establishment was exceptionally busy, and someone did not want to give up their spot at the bar by going to the bathroom, then they could relieve themselves in the trough.

Bar stools and chairs became a more common occurrence as bars became more refined throughout the 20th century, but bar foot rail continued to be a fixture in establishments.

While the basic concept of bar foot rail has not changed over time, the look and durability of the materials used has improved. Classic brass bar foot rail is still very popular within the industry, but advancements in technology have allowed foot rail to expand into newer styles of fixtures and finishes.

The invention of stainless steel has provided a more durable material that can be powder coated to create foot rail with an almost unlimited number of finishes. You can now choose a finish to match any style or color as well as finishes that are weather-resistant for outdoor use. Changing trends when it comes to style has led to additional advancements in foot rail material, including the use of industrial black pipe in many brewpubs and bars today.

Newer technology when it comes to bending pipes has allowed foot rail to keep with designs that go beyond the traditional straight or L-shaped bar. It is easy to shape bar foot rail to match any custom shape or style of bar.

Why Use Bar Foot Rail?

Besides adding that touch of class to your bar, foot rail’s main function is to provide comfort. It entices a person to be more relaxed and casual while they enjoy a cocktail or a pint of their favorite amber-colored beverage. Instead of standing on their two feet for a couple hours, the bar foot rail helps take the weight off a person’s back and spine.

Having that bar rail there to put a foot on is an essential part of the patron’s experience. A customer that is more comfortable is going to enjoy their time, and if they are enjoying themselves then they are going to, hopefully, buy more drinks. It can be an investment that pays for itself. Even if you have stools or chairs lining your bar area, foot rail can still serve its primary function as it gives patrons a place to rest their feet instead of just dangling in the air.

As America’s Leader in Bar Rail, KegWorks can help you find the right style of bar rail to meet the needs of your commercial establishment, home bar or kitchen island. 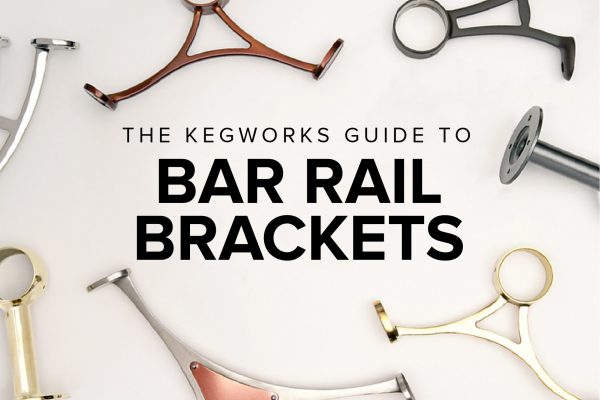 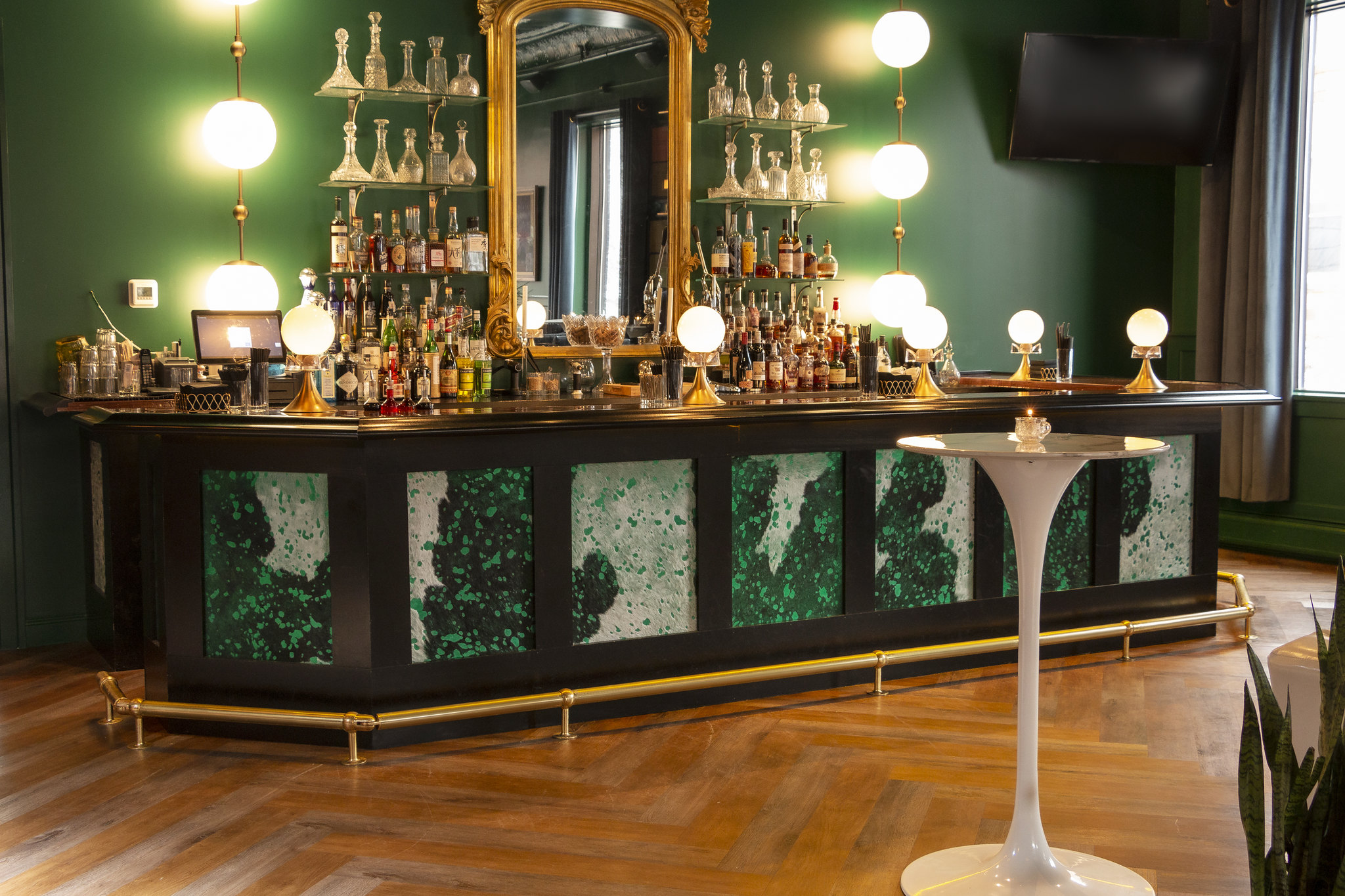