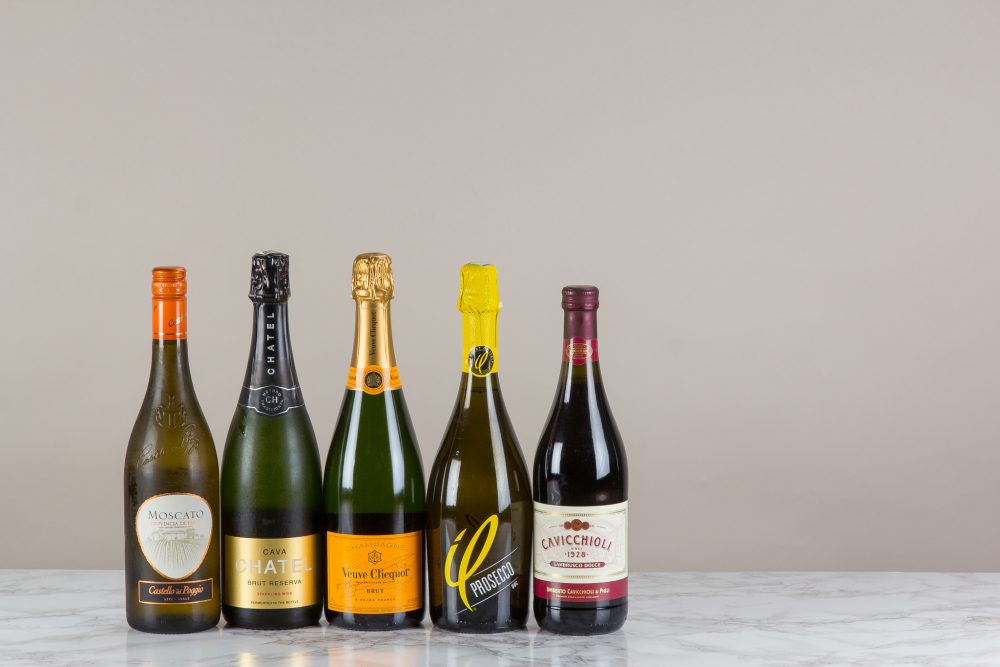 Prosecco is pretty ubiquitous these days. In just a few short years, it has gone from rising trend to menu staple. It now stands teetering on the edge of basic af territory.

Its popularity makes sense. Prosecco is an easy-drinking, affordable sparkler. It feels celebratory without a hefty price tag. But what if we told you it’s not the only way? Prosecco aside, there are many types of sparkling wine on the market equally, if not more, worthy of your attention.

In this article, we lay out some of our favorites in hopes that the next time you’re ready to start popping bottles, you’ll consider branching out.

But first, a word on production methods!

How Is Sparkling Wine Made?

By definition, all sparkling wine is carbonated to some degree, but producers of sparkling wine go about it  differently. Two approaches, the méthode traditionnelle (also called the méthode champenoise) and the Charmat method, are used most commonly. 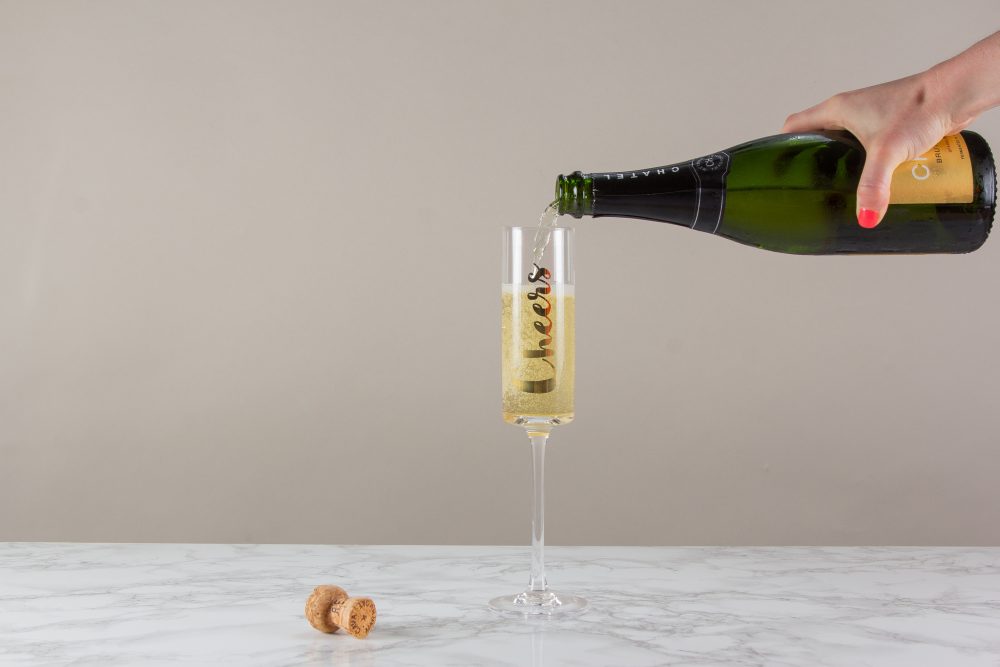 The méthode traditionnelle is the most meticulous and expensive sparkling wine making method, and it is the method used exclusively by winemakers in the Champagne region of France. It is a labor-intensive, highly regulated process from start to finish. Perhaps its most noteworthy differential is the fact that wine made according to the méthode traditionnelle undergoes secondary fermentation in the bottle, which produces carbonation and desirable sediment. The longer a wine ages in the bottle with this sediment, called lees, the more complex its flavor and aroma typically become.

A cheaper and faster carbonation process used extensively outside of Champagne is is the Charmat method. In this case, secondary fermentation happens in bulk in large tanks, not individual bottles. Wines produced according to the Charmat method, most proseccos included, miss out on the benefits of aging in the bottle.

Sparkling wine production is not limited to the above described methods, however. The cheapest sparkling wines on the market are generally force carbonated like soda. That means carbon dioxide is pumped into tanks filled with still wine to turn it sparkling. It is then bottled under pressure. The carbonation is not a product of yeast activity.

The Sparkler of the Moment: Prosecco

First things first, let’s talk prosecco. This Italian sparkler is made, as previously mentioned, according to the Charmat method from a grape called glera, a high-yield, neutral white varietal native to the Veneto region. Because it isn’t aged on the lees, prosecco tends to taste more of the grape, which means fruit forward notes like melon, pear, and green apple are common. Also because of its production method, the bubbles are larger and dissipate faster than champagne. Prosecco can be frizzante (semi-sparkling) or spumante (fully sparkling). A decent bottle can be had for as little as $12, making it a good option for mimosas and bellinis. That said, complex, higher-end proseccos from the Conegliano Valdobbiadene DOCG and Colli Asolani DOCG are available, some of which are made in the méthode traditionnelle. 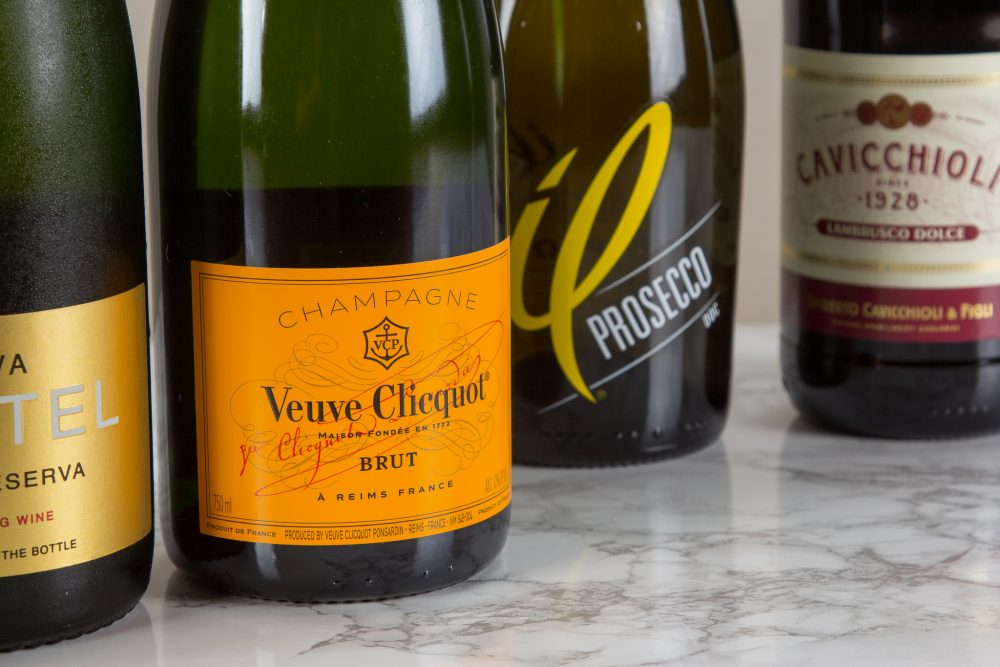 Within the EU, only sparkling wines produced in France’s Champagne region, northeast of Paris, can legally be labeled “champagne.” Wines produced outside the EU sometimes bear the name champagne because they are not subject to the same regulations, but they do so misleadingly.

The microclimates and soil of Champagne--its terroir--contribute to the distinct taste of champagne, as does its rigorous production method (méthode traditionnelle). Additionally, champagne producers may only use three grape varietals: pinot noir, chardonnay, and pinot meunier.

Champagne is typically around 12% ABV and can be very dry, very sweet, or anywhere in between, depending on the dosage (added sugar). From the driest (least residual sugar) to the sweetest (most residual sugar), the labeling scale is as follows:

Champagne tends to be the priciest sparkling wine option in any store due to the cost, labor, and time involved in its production; the quality of its vineyards; and its world-class reputation. Well-known champagne brands in the United States include Moet & Chandon, Dom Perignon, Bollinger, Taittinger, Veuve Clicquot, Piper-Heidsieck, and Pol Roger. But there are also many, many smaller producers making out of this world champagne, so don’t go by name recognition alone.

Crémant: The Other French Sparkling

Elsewhere in France, many winemakers adhere to the méthode traditionnelle to make fine sparkling wines. But because they are not growing and producing in Champagne, their wines are called crémants and not champagne. Crémants are commonly produced in Alsace, Burgundy, Jura, and the Loire Valley, and can be made from a wider range of grapes than champagne. Pinot blanc, pinot gris, riesling, and chenin blanc may be used, among many others, in addition to pinot noir and chardonnay. 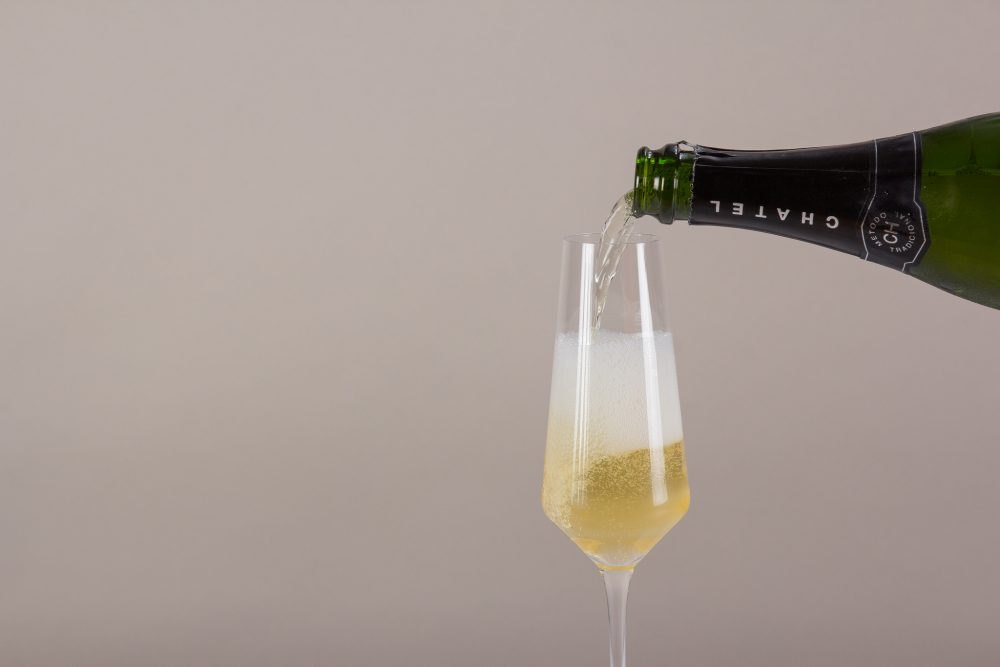 Wines categorized as pétillant naturel can be red or white (and sometimes pink or orange). They are unique in that they are made according to the méthode ancestrale--a process that dates to 16th century Limoux, France. In the case of pét-nats, winemakers sometimes rely on wild yeast that naturally occur on the skins of grapes for fermentation. But the biggest difference between pét-nats and other sparklings is that they are bottled before all of the sugar is converted to alcohol during primary fermentation. That leftover sugar is left to ferment in the bottle with a “whatever will be, will be” devil-may-care sort of attitude. In other words, when you open a bottle of pét-nat, you never quite know what you are going to get in terms of sweetness, flavor profile, or carbonation level. Compared to refined, tightly managed champagnes, pét-nats are raw, rustic, funky, and unpredictable, and in many cases, sediment is left in the bottle, lending a cloudy appearance.

Spain’s answer to champagne is cava. It's a dry sparkling wine that has been made there, primarily in the Catalonia region, since the late 19th century. Like French sparkling, cava is made according to the méthode traditionnelle, which yields elegant, fine bubbles, and complexity from time spent on the lees.

Cava relies on Spanish grape varietals macabeo, parellada, and xarel-lo, though pinot noir and chardonnay are often added to the final blend. Thanks to the unique Spanish terroir, cavas can have high minerality and taste of the sea. They tend to make excellent aperitifs and accompany shellfish nicely.

Moscato is Italian for muscat, a wine grape variety notable for its strong perfume and long history. It is thought to have been cultivated for winemaking by the Greeks and Romans of the ancient Mediterranean. These days, in Italy’s Piedmont region, the finest, ripest moscato grapes are turned into moscato d’Asti--a sweet, lightly sparkling white wine with an ABV of 5.5%. Moscato d’Asti is typically golden yellow and retains much of its namesake grape’s fruity qualities and intoxicating fragrance. Its low alcohol content, marked residual sugar, and subtle fizz make it an excellent session wine on warm days. It is also appropriate after dinner, for or with dessert. 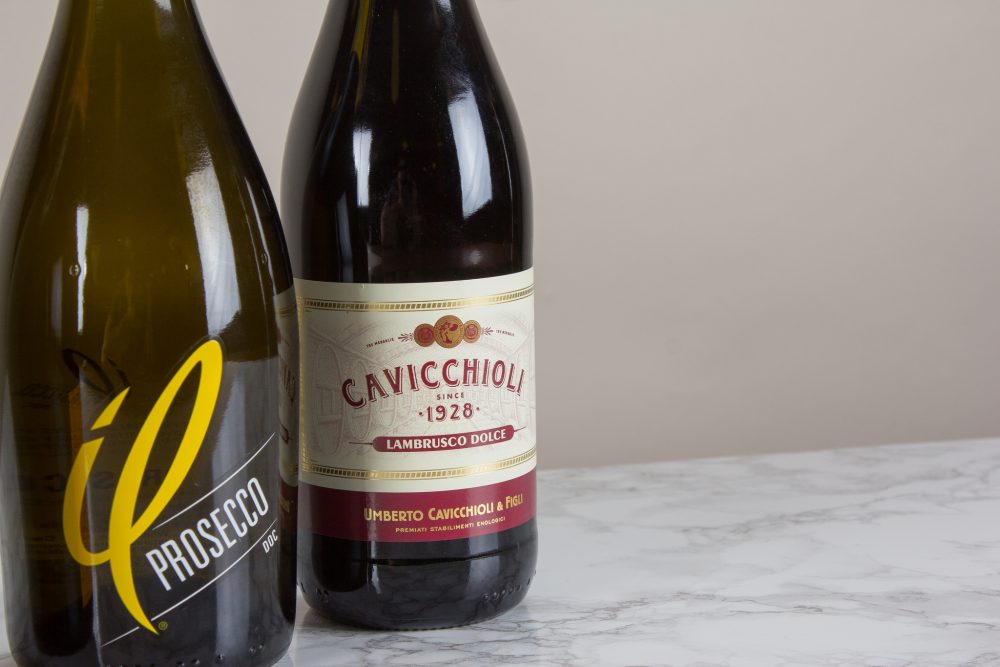 Lambrusco, an effervescent red wine from Italy’s Emilia region, has a bad rap. That's thanks to the offensively sweet, mass-produced examples that flooded the U.S. market in the 1970s and 80s. But now, it’s easier than ever to come by carefully made lambruscos of merit.

Despite the stereotypes, authentic lambrusco is available dry (ecco), off-dry (amabile), or sweet (dolce), and is far from one note. Well-made lambrusco can be brightly acidic and rich with red fruit, earth, funk, musk, and tannins. And in many cases, ecco and amabile versions make good food wines. They are especially good paired with pizza or the rich pasta, cheeses, and cured meats of northern Italy.

Small production lambrusco may be made according to the méthode ancestrale (described above). This is cause for much of their charm and nuance. Bulk lambrusco is generally carbonated more quickly and cheaply according to the Charmat method, but can still be quite pleasing.

With a wide world of sparkling wines on the market, there’s no reason to limit your sights to prosecco. The next time you reach for a bottle of something bubbly, make it an alternative. (You can always pick up a bottle of prosecco, too...) 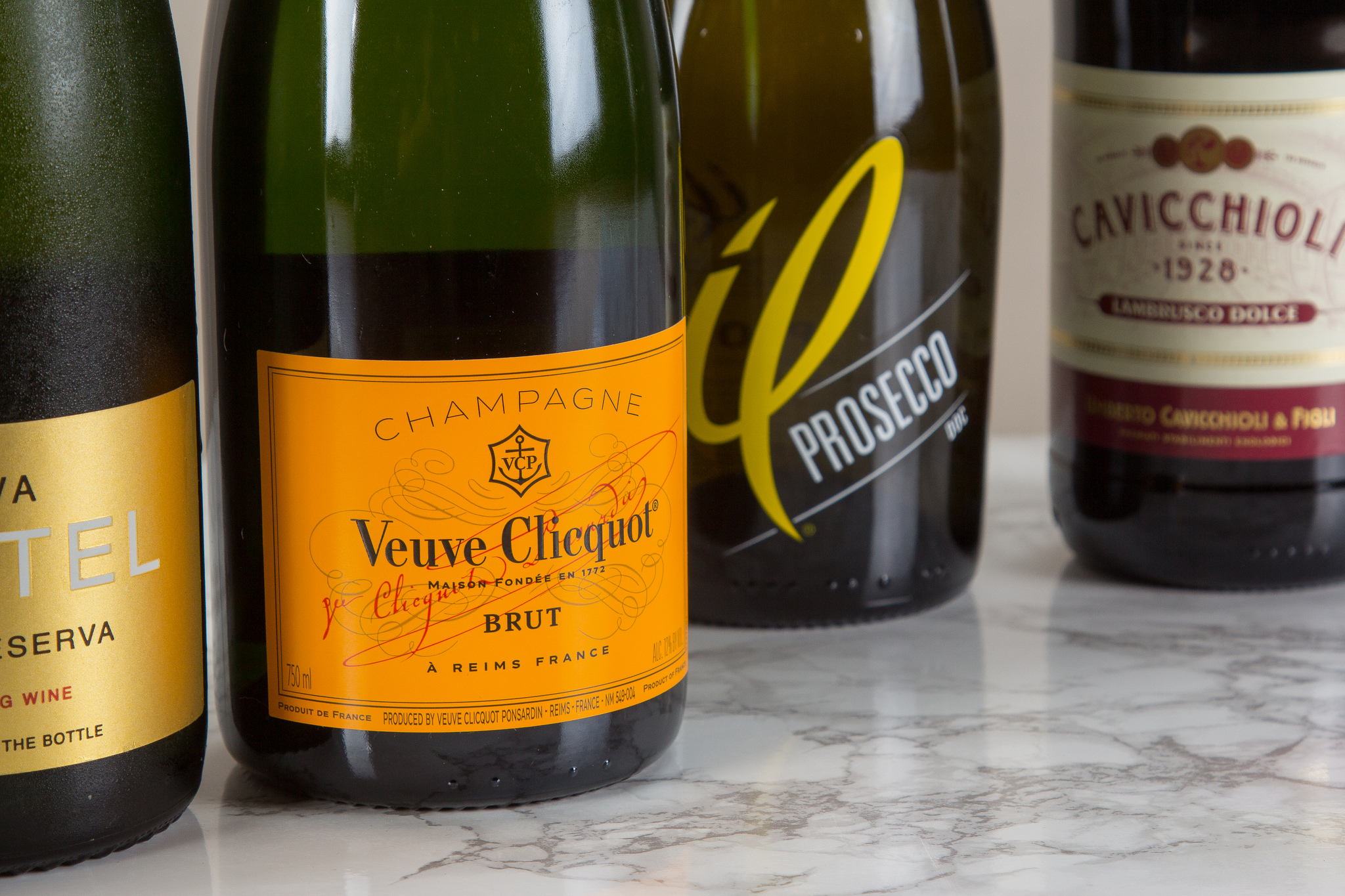 All That Sparkles: The Differences Between Champagne, Prosecco, Cava, Moscato, Lambrusco & More 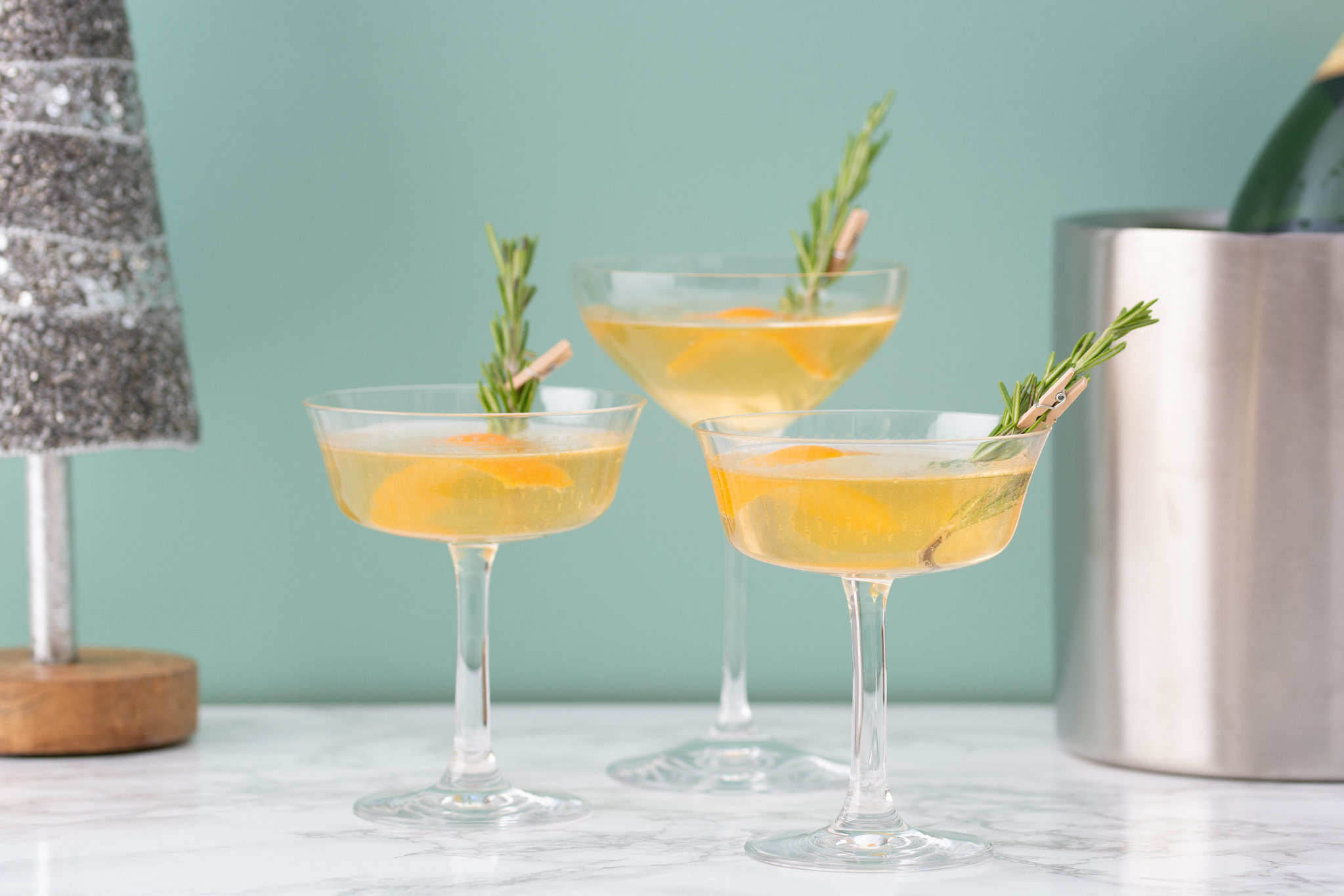