There is a tried and true, Guinness-approved method of how to pour the perfect pint of Guinness. There is also the method used by bartenders in Ireland, which is slightly different. And, there is a standard, quick method to pour a normal beer, used by bartenders most everywhere...including many whom *gasp!* pour a Guinness without a “2 part pour”. 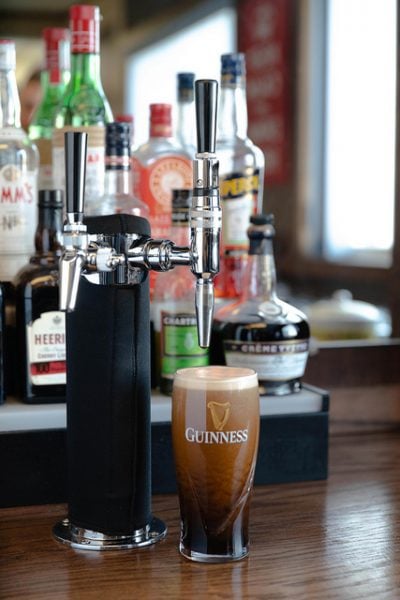 The History of the Guinness 2 Part Pour

The unique Guinness 2 part pour method, dates back to the 1930s and began as a means to solve a problem. Guinness beer came in two types of casks: highly conditioned casks, and more lively and mature, low-conditioned casks. Bartenders in those days had to fill a glass three-quarters full with the low cask before topping it off with beer from the high cask. This was a very convoluted process, and seemingly every bartender had their own way of doing it.

In search of new ideas, Guinness hired a mathematician-turned-brewer, Michael Ash, in 1951. Ash saw nitrogen gas as an obvious solution to the problem: “It’s completely inert and it’s three-quarters of what we breathe. It was perfect for this purpose.” After much testing and research to find the perfect keg for this new method, Nitro Guinness Stout was launched in 1959 to coincide with the 200 year anniversary of the brewery.

Guinness Commercial Campaigns Add to the Mystique of the Pour

Guinness has continually embraced this pour over the years, leading to multiple advertising campaigns with slogans such as “There’s No Time Like Guinness Time” and “Good Things Come to those Who Wait”. These spots, including Surfer, Anticipation, Tipping Point, and Swim Black, are creative, entertaining, and wildly successful. They have helped pushed the Guinness name to new heights.

Not only are these commercials well-thought out and fun, but Guinness draught is very camera-friendly. When pouring a nitrogen beer with a Nitro stout faucet, it creates what is known as a cascading effect. In the cascade, the bubbles seem to travel down and around the glass, rather than up, as with any beer from a CO2 system. This visually appealing settling process adds to the aura of a Guinness pint. The beer’s color slowly changes- from a creamy light brown to a very dark ruby red. Being the first beer served using Nitrogen, Guinness surely wanted to show off the unique way the bubbles in their beer traveled.

But Why Is the “Perfect Guinness Pour” Still a Thing?

The 2 part pour was initially used as a means of dealing with a problem that was solved by Nitrogen. In that case, what is the reasoning behind the 2 part pour today? According to a quote from Colm O’Connor, a Guinness beer specialist, the reason is “...because if we poured it in one fell swoop, the head would be too big.” Per Fergal Murray, Guinness master brewer and global ambassador, the head size on your Guinness should be between 18-20mm, which is somewhere between 11/16"-12.5/16".

Another reason is, of course, the presentation of the beer. The 2 part pour allows a customer to witness the cascade effect twice, highlighting the beauty of the beer as it changes before one’s eyes. Guinness is very adamant that their beer is not black, and that its roasted malted barley gives the beer its distinct dark reddish color.

The Experiment: Does the Proper Guinness Pour Actually Matter?

Is O’Connor correct? Does your beer actually come out with a smaller, properly-sized head if you use the proper Guinness pour? If so, does it make it any more enjoyable, or have we been waiting all this time for no reason? We were curious, so we enlisted our R + D (Research and Drinking) team to do a little testing on various pour styles.

The Variables: A Good Scientist Standardizes any Experiment

We didn’t want other factors affecting each pour, so it was important that each of the 3 pour styles we tried were given their fair shake. We let each beer sit for 2 minutes after the process of the pour was complete. This allowed each beer to fully settle, and for Guinness to turn to its dark stout color. We then took a photo of each and measured the head size of each pour.

For the purposes of the experiment, the first pour was thrown out. Not literally of course, someone drank it, but it was not included in the results. The first pour from any draft beer system that has been sitting for at least a few hours will lead to a slightly foamier result.

We also used the same 20-oz Guinness Imperial Pint Glass for each beer. This is, of course, the branded vessel specifically made for drinking the stout known as ‘black gold’.

We poured all of these Guinness beers at 35 PSI. Guinness should be poured within a range of 30-35 PSI. Altitude and temperature play a role in whether your Guinness draught should be poured at the higher or lower end of that range. When setting up your system for Guinness on tap, if the beer comes out with large bubbles in the head, the PSI is too low and should be adjusted.

On to the pours!

How to Pour Guinness: The Brand Standard

The Guinness-endorsed standard pour is a 6-step process, and goes as follows:

Use a Guinness-branded glass with the harp logo. 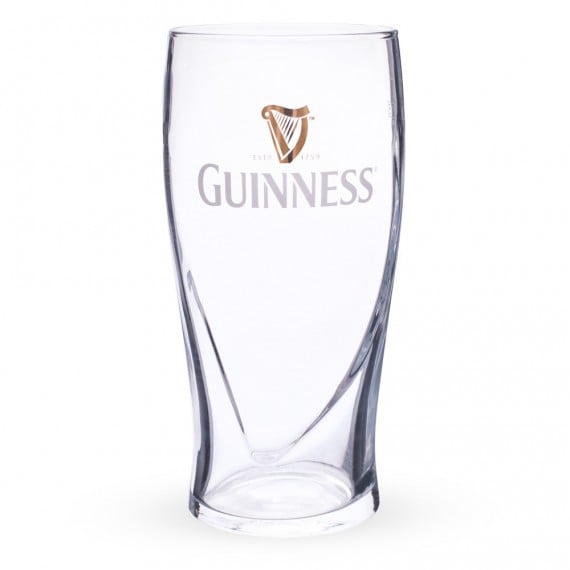 Hold the glass on the bottom with your pointer finger on the harp. Aim the spout at the harp, at a 45° angle. 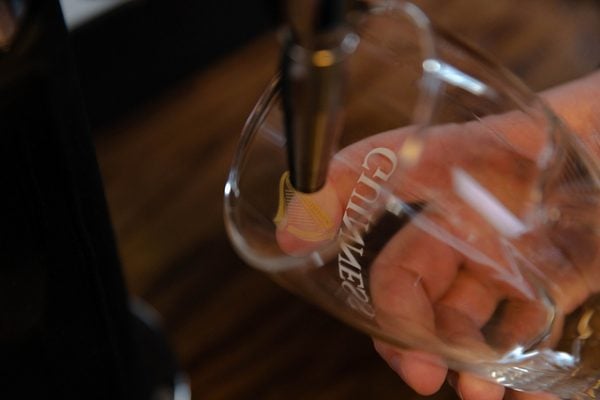 Pull the spout toward you and pour until the glass is ¾ full (to the top of the harp logo). 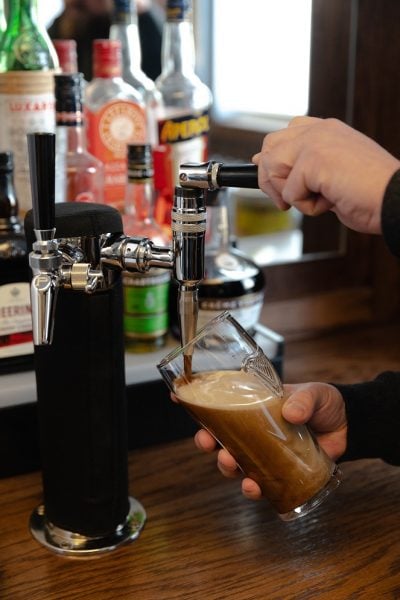 Let the beer surge, or cascade. According to Guinness, this process takes exactly 1 minute and 32.5 seconds. 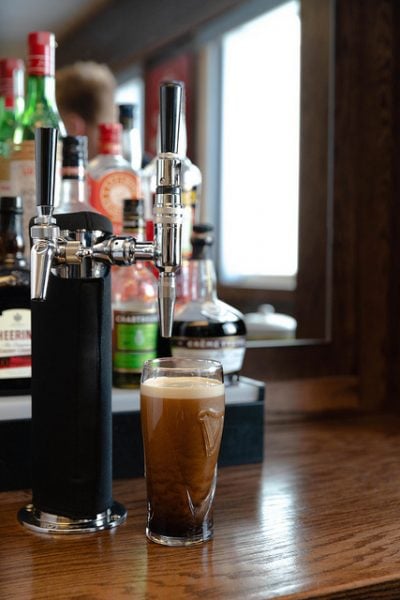 Top off your pint by pushing the tap handle away from you. This limits the power of the flow. The beer should be set straight under the spout during this second pour. 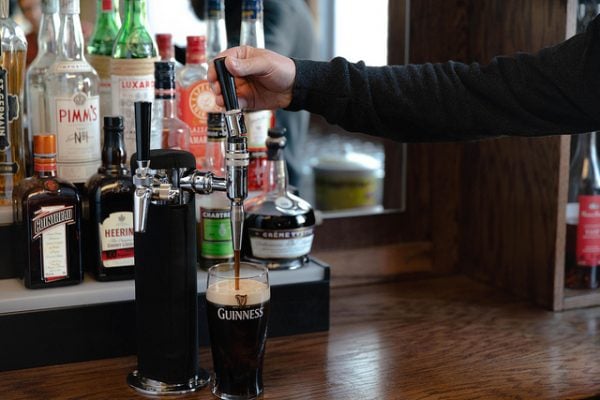 Serve the beer with the logo facing toward the drinker. To the drinker: Look to the horizon. Stand proud. Enjoy your Guinness. 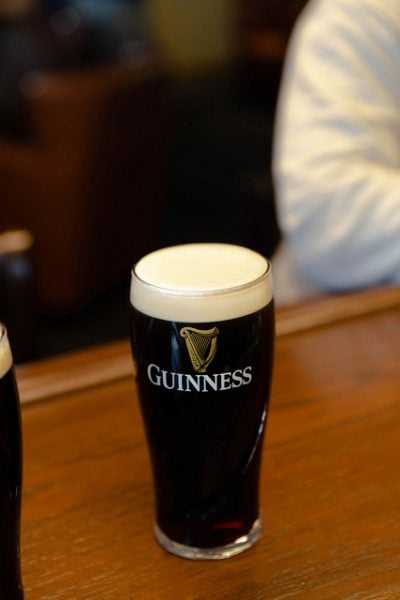 How many seconds to pour a Guinness correctly?

The official word from Guinness is that this entire 6-step process takes 119.5 seconds in total. Not 119 seconds, not 2 minutes, 119.5 seconds! Be sure to have your stopwatch at the ready, as we did.

The amount of foamy head from the tried-and-true, proper way to pour a Guinness, measured in at 11/16” exactly. This is exactly within Fergal Murray's perfect measurements! Did the other pours measure up this precisely? 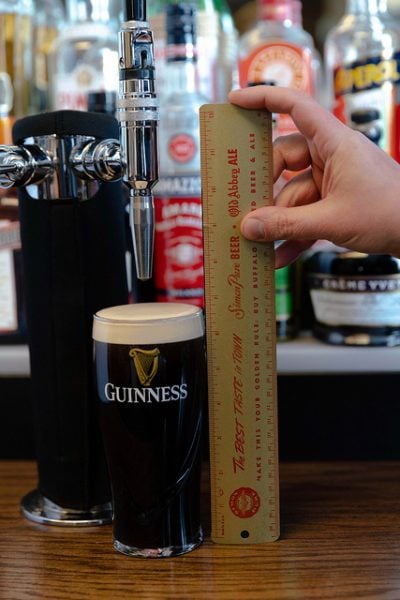 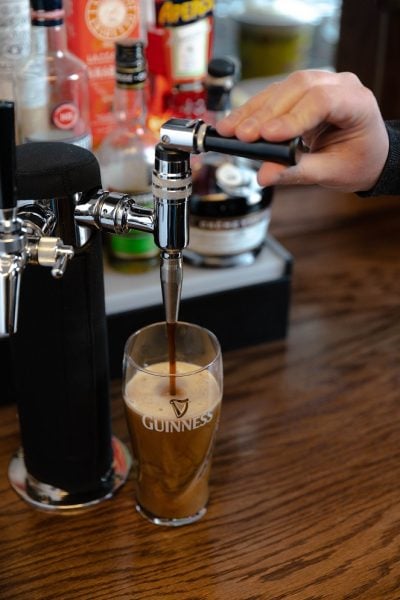 We spoke to our resident travelers, and they said that the Guinness method is not exactly practiced by the majority of bartenders in Ireland. While they do use the classic 2 part pour, they use a slightly different approach:

Rather than the 45-degree angle for the first pour, they just set the glass under the tap from the start.

The foam atop the Irish pour was measured at exactly 13/16”, slightly above the ideal Guinness head size described by Fergal Murray. 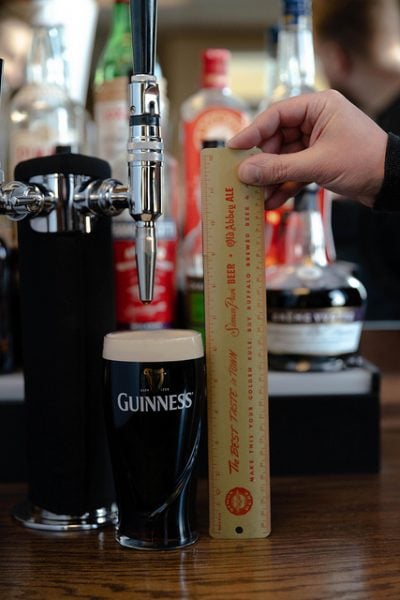 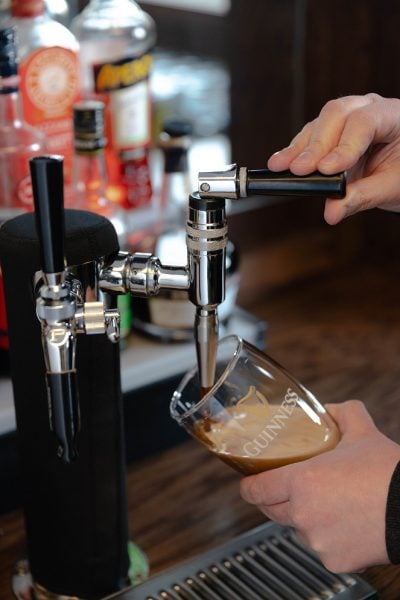 Especially on St. Paddy’s Day, when Guinness becomes the most popular drink order at pubs throughout the world, a rushed bartender may be less willing to wait for the 1 minute and 59.5-second settling process before completing their pour. Many may not even be aware of this tactic. As such, we tried out the standard bartender fast method of pouring beer:

The standard busy bartender pour produced a beer head size of exactly 14/16”, a whopping 3/16" larger than our Guinness standard pour. It's also 2.225-mm above Murray's range for a perfect Guinness pint. 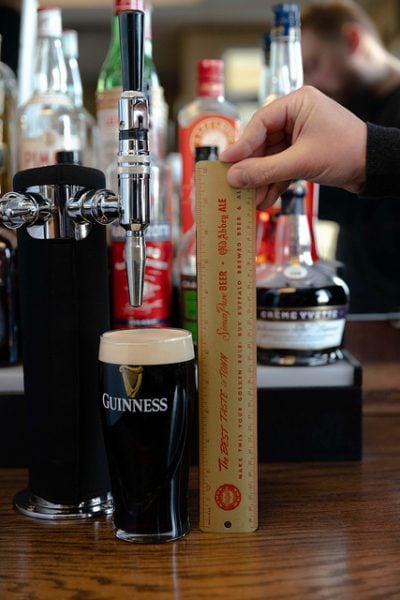 Does the Guinness Pour Actually Make a Difference?

Admittedly, we were skeptical that the “Guinness perfect pour” was anything more than a myth. However, there were actually some notable differences between the result of the three pour styles.

Tell Us What You Think

After careful testing, it seems that there is a slight variation produced by this time-intensive, time-honored technique. Does it truly make a big difference in how enjoyable your beer is? Is it worth the 1 minute and 59.5 seconds you have to wait? That’s for you to decide. If you have a strong opinion on it or want to critique our experiment, feel free to let us know in the comments or on social media. One thing that is indisputable: the next time you order a pint of Guinness, you’ll be closely watching the bartender’s pour. 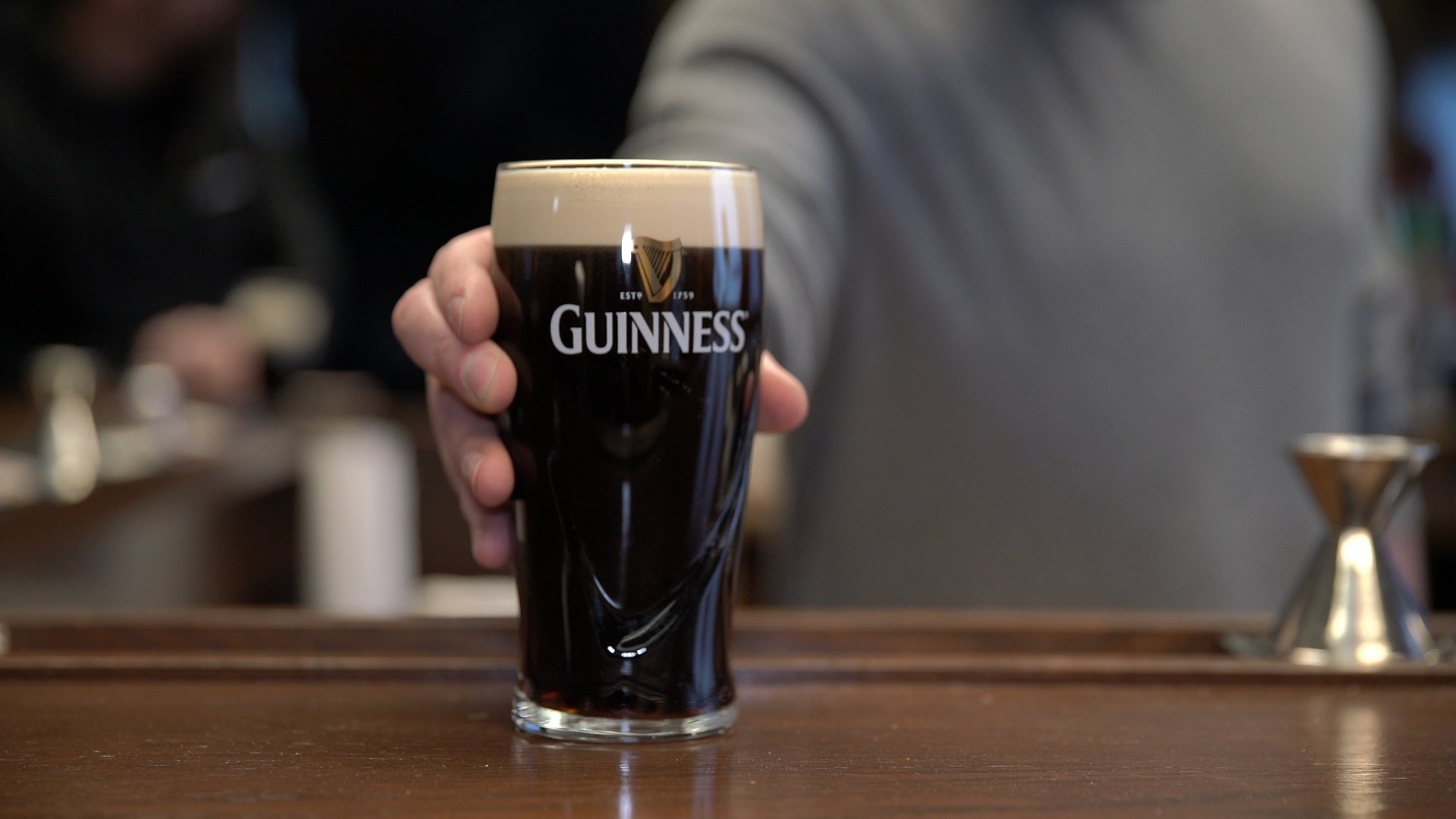 How to Get Guinness on Tap at Home